We quite often receive messages from folk on Instagram asking for advice and asking how Gary got so many followers. This is happening even more now with many people being on lockdown and people turning to social media to pass the time, so I thought that a good way to address this (and kill some time) would be to write this blog post. 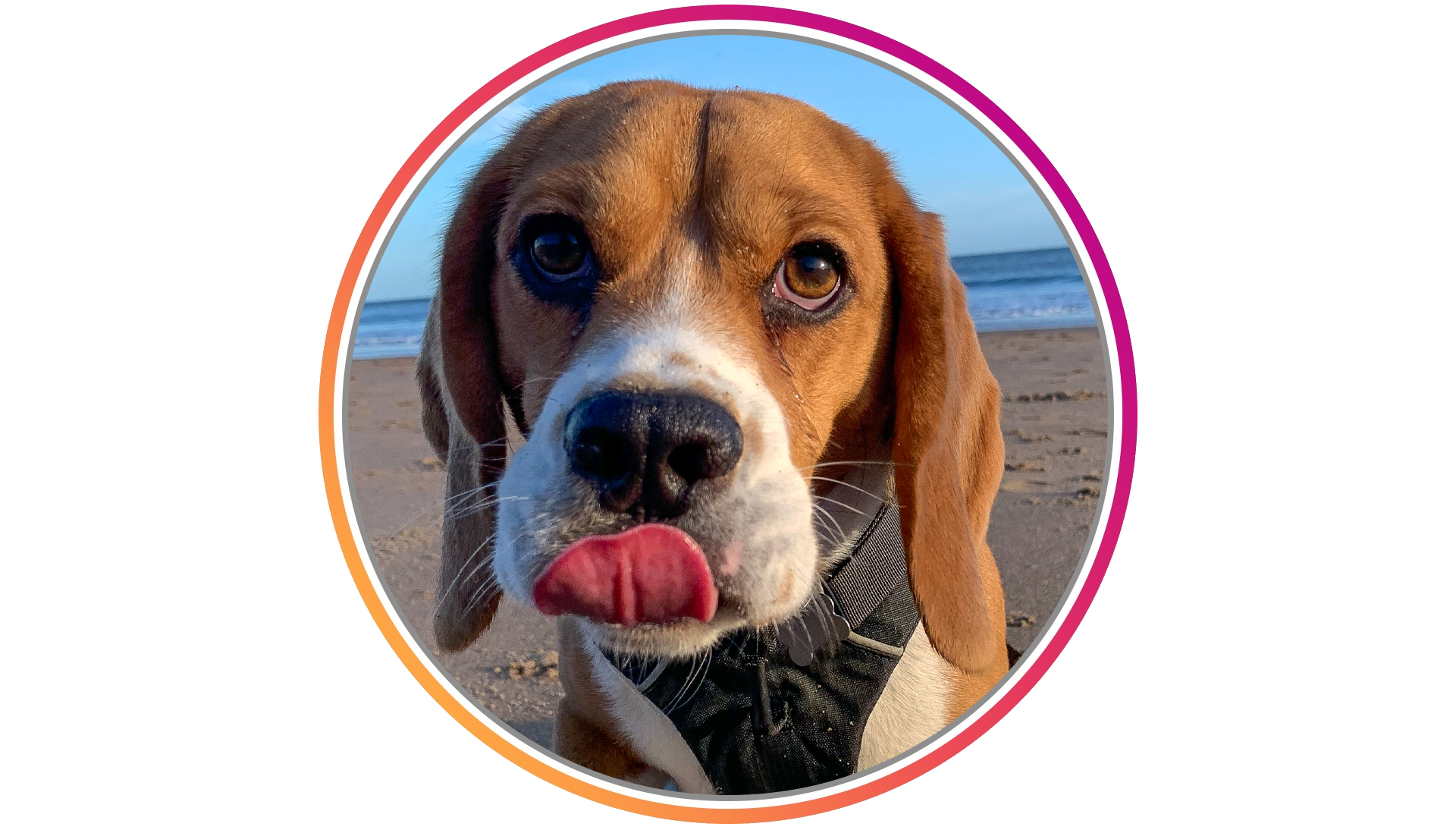 The truth is that I don’t exactly know how Gary’s following started (and continues) to grow. We didn’t set out to have an “Instafamous” or an “influencer” dog. We just got Gary because we just wanted a dog and setting up his Instagram account was an after thought that came along when we started to realise that our own personal social media accounts were becoming full of puppy spam. So we set up Gary’s social media for friends and family that wanted to see pictures of him and also so we would have a timeline of Gary’s life. It was only when Gary’s followers grew beyond 1,000 that we started to take it a little more seriously. Friends started telling us that their kids loved to follow Gary’s adventures, we started to get messages from people who told us that Gary’s posts brightened up their day and people saying that the found comfort in Gary’s posts after their dogs had passed away… So we just decided to go with it and we’re just learning as we go.

So here are a few tips of what we think makes a good Instagram account along with some do’s and don’ts. 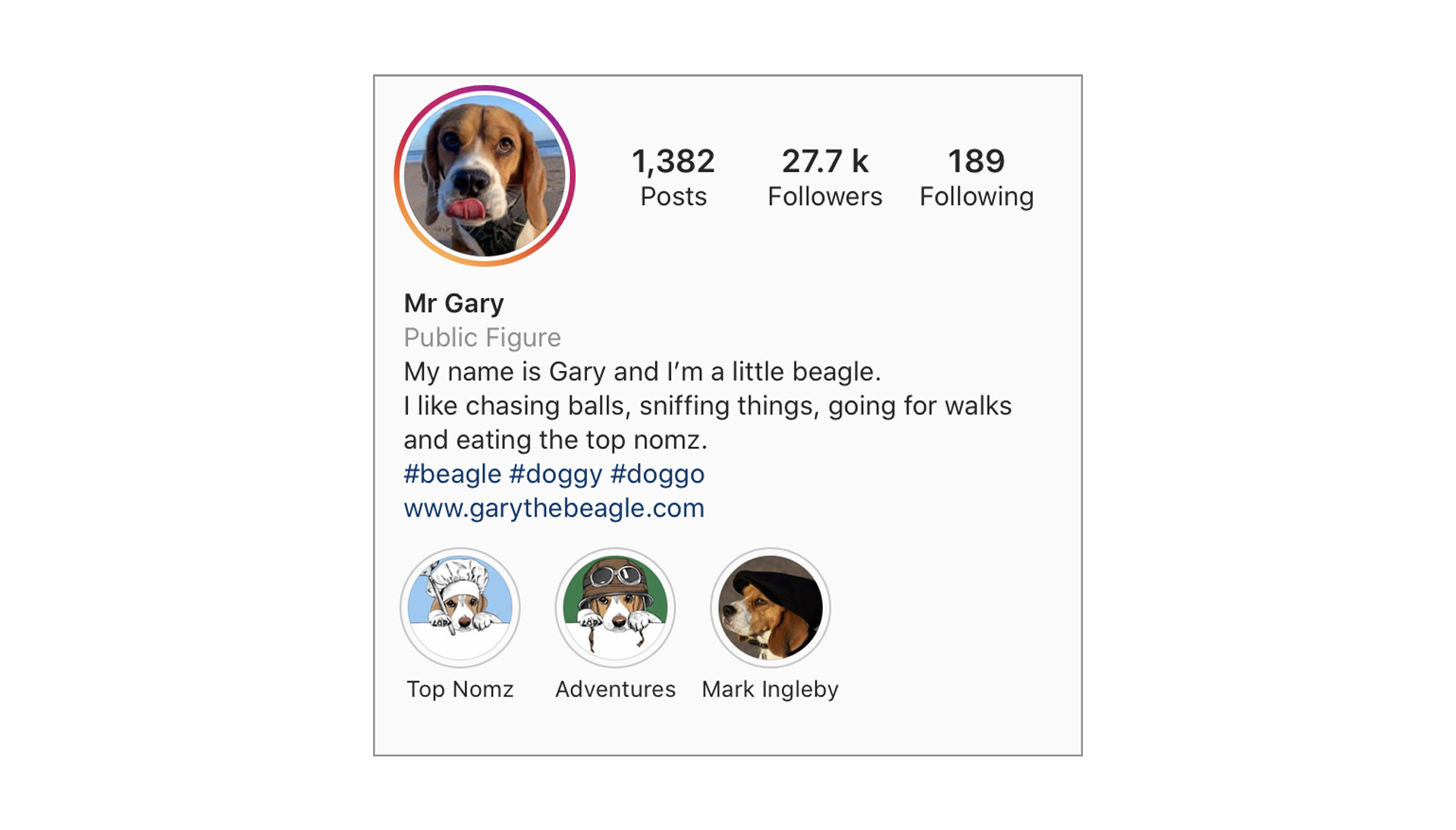 In order to attract followers and boost engagement you need to have content showing up in the various feeds (Followers, Recommended, Hashtags). Approximately 95 million photos and videos are shared on Instagram per day, so it’s not going to take long for your posts to end up disappearing into the void. There is no magic number and how many posts can vary widely from account to account. Most people will say that for an average account the general rule of thumb is 1 to 2 posts per day, but some might say up to 10. I know for Gary’s account 10 posts per day would be insane, people would just get bored and engagement would drop through the floor, but for an account like National Geographic that has over 133 million followers (at time of writing) scattered all over the world posting 10 or more times a day makes sense.

When it comes to when is the best time to post, your Instagram incites are your friend. Your audience incites will tell you times when your followers are using the app.

Hashtags can be a bit of a mystery. I’ve found  that sometimes a set of hashtags will perform really well and the next they’ll time be a total flop. Out of curiosity, I have tried most of the recommended methods and found little consistency with any of them.

For example, one of the things you often read is that you shouldn’t use the same block of copied and pasted hashtags over and over, but yet in the early days this is exactly what I did and it worked. Other blogs might say to put hashtags in the comments, again I have seen little evidence to support this.

The one thing I do know is for the most part they work, but there are a few rules I try to stick to.

Keep them relevant… This should be quite obvious. If your post is about a dog then use hashtags relevant to dogs. Don’t use a hashtag because you think it’s popular or you think you might get more “likes”. If your post has nothing do with #thegoodchicken then there’s no point in using that hashtag.

Hit your niche… Using niche hashtags is a great way of hitting your target audience. They might not get you a shed load of impressions, but they get you a better quality of impressions which can lead to more engagement and potentially more followers.

Get generic… Don’t discount using broad and popular hashtags. Some say that using popular hashtags can be a waste of time because you’re competing in a very crowded arena. As long as they are relevant to your post and you use them wisely, then they can help you reach that wider audience. 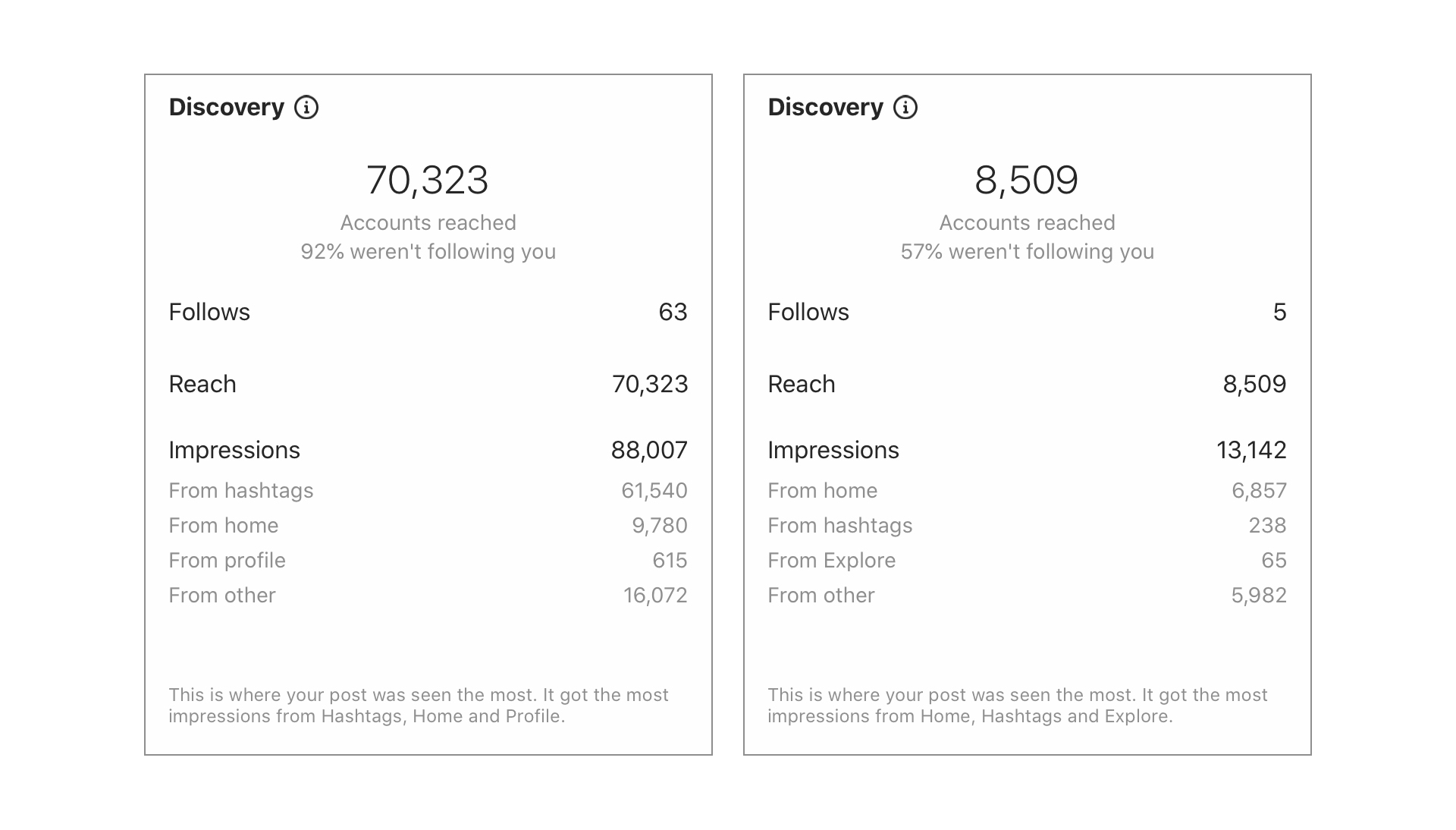 Instagrams tagging feature is quite a powerful tool, but it is also that one that is abused the most. When you tag another account, that account gets a notification and your tagged picture appears on that account’s profile. Unfortunately this has lead to some users thinking that this is a way to gain followers and increase engagement by using the maximum amount of tags, which is 20 per post. If you are using this tactic then you should probably stop as it can lead to you account being muted or even blocked.

When to tag… If you are out with your doggo friend at the beach having a pawsome time, then sure, tag them! If you’re working with a brand to promote their products, sure tag them. If you’ve done some fan art, why not?! If it’s relevant to the post then it is a good tool to use.

When not to tag… Just to get attention by tagging every account you can think of that has no relevance to your post. It’s just a bit spammy. 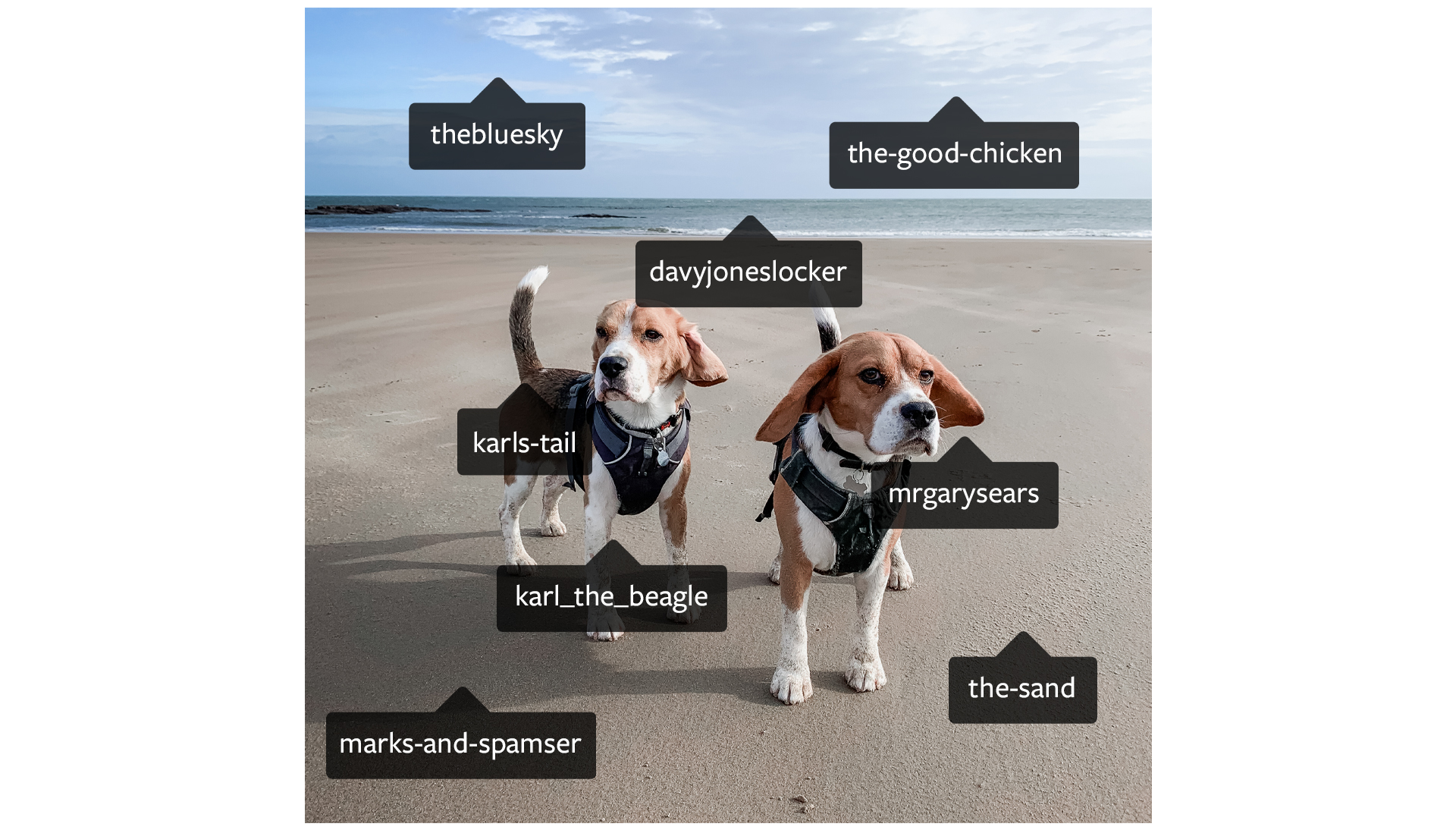 The Follow for Follow game is something I’ve never understood. For those who don’t know it is a numbers game that entails following (often randomly) as many accounts as possible in the hope they will follow you back. It is quantity over quality and often results in short term gains and a low engagement rate. You can quite often spot these users as they will usually be following more than a couple of thousand accounts and often be following more people than they have followers. It’s not a good way to grow an account as the Instagram algorithm scrutinises subscribers who use this method. It’s a tactic I would say to avoid.

Reply to Comments and Messages

Sometimes it’s easier said than done, but your followers have taken the time to engage with your post and leave a comment, so it’s just polite to reply.

The same goes for messages. We often get messages for people asking advice on training and other beagle type things and we always try to reply. It can be nice that people feel that they can come to us and ask.

But like I said above, it can be easier said than done, especially when you have a post that generates hundreds of comments, it can be overwhelming. In that case at least try to tap the heart. 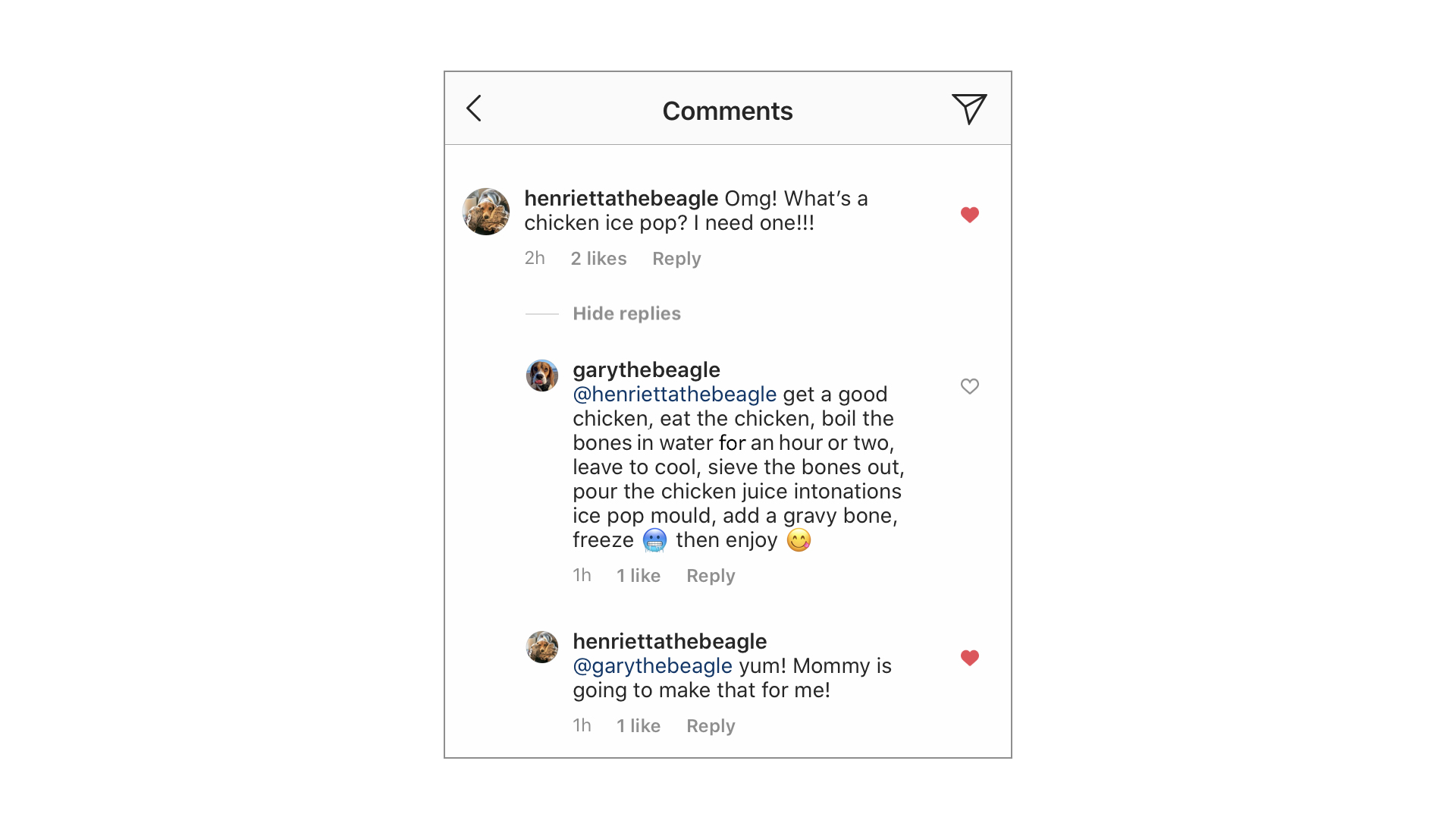 Possibly the most important thing is to be original. There is no point in copying another account because they have lots of followers, there’s a good chance that if those followers see your Instagram they will just see that you’re copying their style.

Now some might say that thinking of a style or a tone of voice for their instagram profile isn’t always that easy. In that case just be yourself. Quite a few of the things that have become Gary’s little jokes are things from everyday life. ‘The Good Chicken’ is just something from when I was a kid and on special occasions like birthdays and Christmas people would buy nice food from Marks & Spencer… “That’s the good chicken from Marks & Spencer”.

Thanks for reading, there’s probably a whole lot of stuff that I haven’t covered, but we can save that for another day. I hope you’ve found something useful in this post. Some experts might disagree with some of what i’ve said, but this is just from my own experience… If you have any question or comments just drop me an email, DM or send a letter in the post.