Here in my blog I hope to introduce you to some of my favourite adventures, and it wasn’t hard deciding where to post about first… Simonside! This place has everything! Woodland with some of the finest sniffs, rocky crags to scamper up and muddy moorland to get your paws dirty! Just look at that view from the top of the crags.

Simonside is located just outside the town of Rothbury in Northumberland and offers a huge amount of options for a doggo to explore right from the carpark (which is FREE). My personal favourite is to follow the signs for the red route. This takes you through the forest, up the crag and down across the moorland, before bringing you back along the road to the carpark. 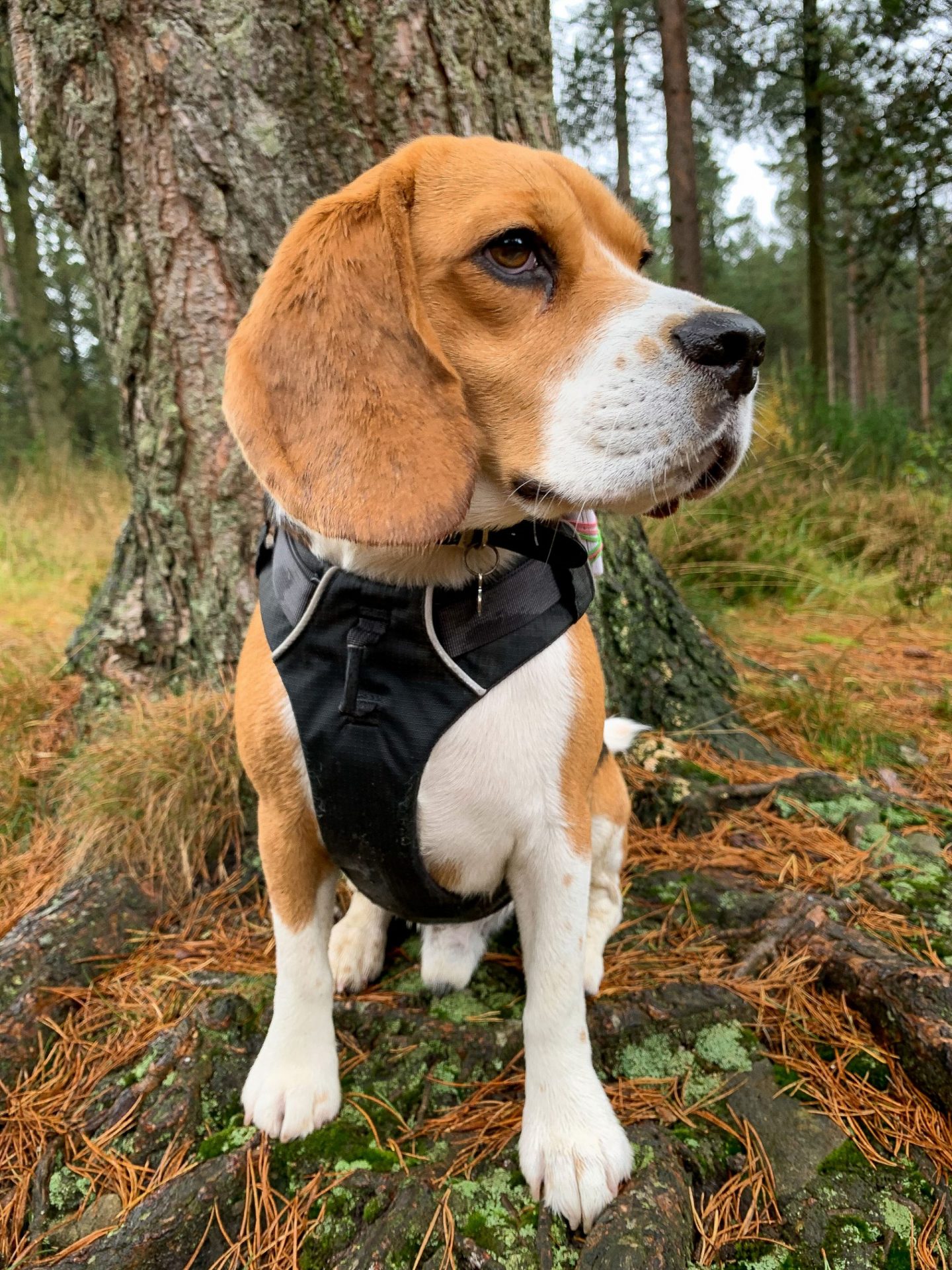 Start by following the forest road up the hill and out of the car park (if you are standing in-front of the information board this is the road to your right). Once you’ve sniffed your way up to the first fork in the road take a right and continue to follow your nose.

The sniffs in this part of the woods are particularly good, so you will need to fight the temptation to not to run off into the woods. This area is teaming with wildlife including deer, rabbits, red grouse and goats, but you don’t want to get lost around here. These hills are also said to be the home of fairy folk and little people like the Duergar. It is written in the Dictionary of Phrase and Fable that the Duergar are “Dwarfs who dwell in rocks and hills; noted for their strength, subtlety, magical powers, and skill in metallurgy. They are the personification of the subterranean powers of nature.” But who knows? Maybe the humans who claim to have seen these ‘little people’ might have been eating the local mushrooms. 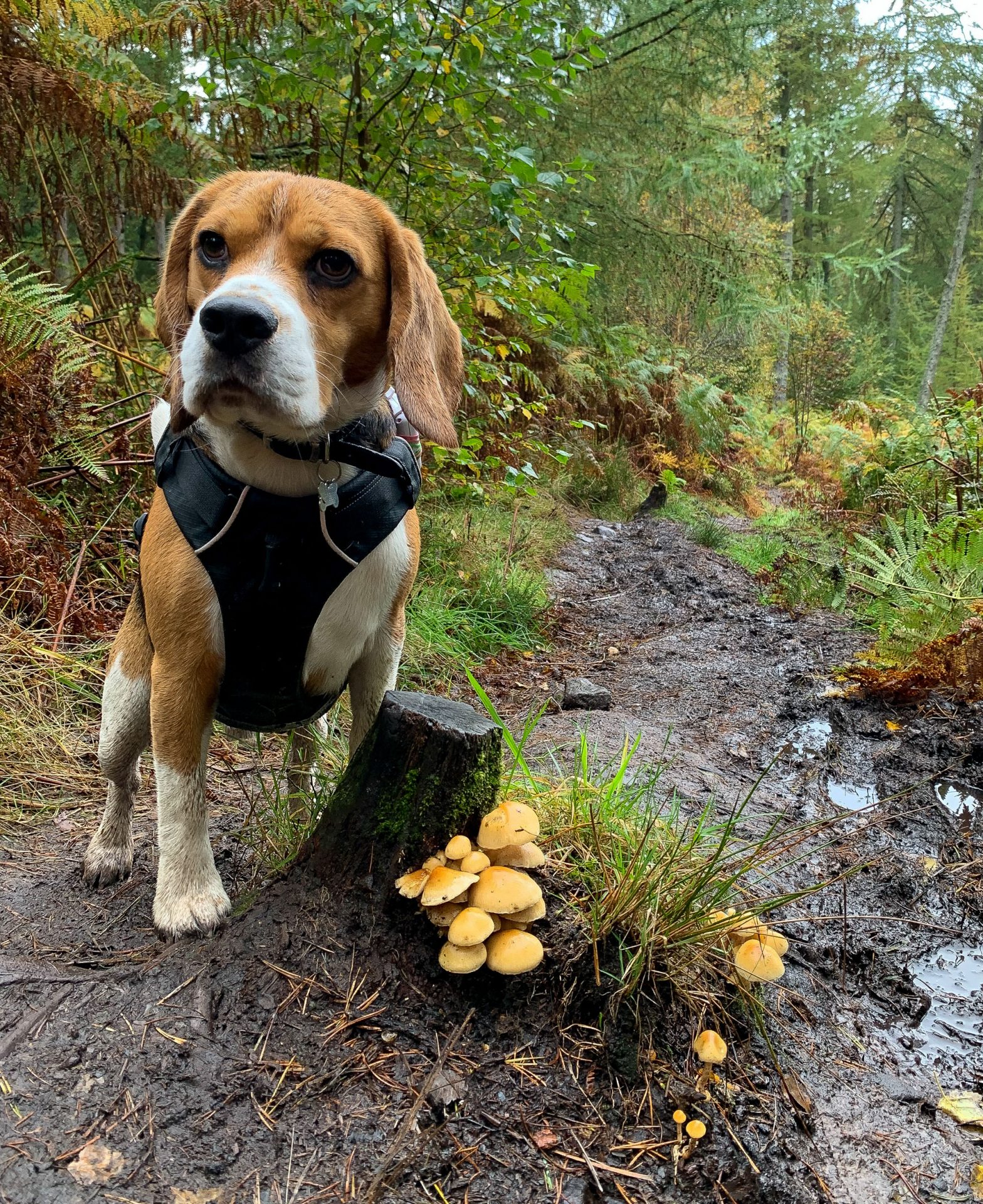 Once you’ve wandered a bit further through the forest you will come to another fork in the road, here you take a left. You’ll see a signpost for Little Church Rock, which is neither a church nor little. The rock features cup marks that are said to be over 4,000 years old (that’s canny old). The name is a reference to the monoliths used as a gathering place.

Once you’ve checked out the rock and got back on the track, follow it up the hill on the left, along a rough and rocky path that will lead you up to the crags. It is amongst the rocks were it is said the ‘fairy folks’ live, but my snooffer couldn’t smell any ‘little people’, just grouse poop. 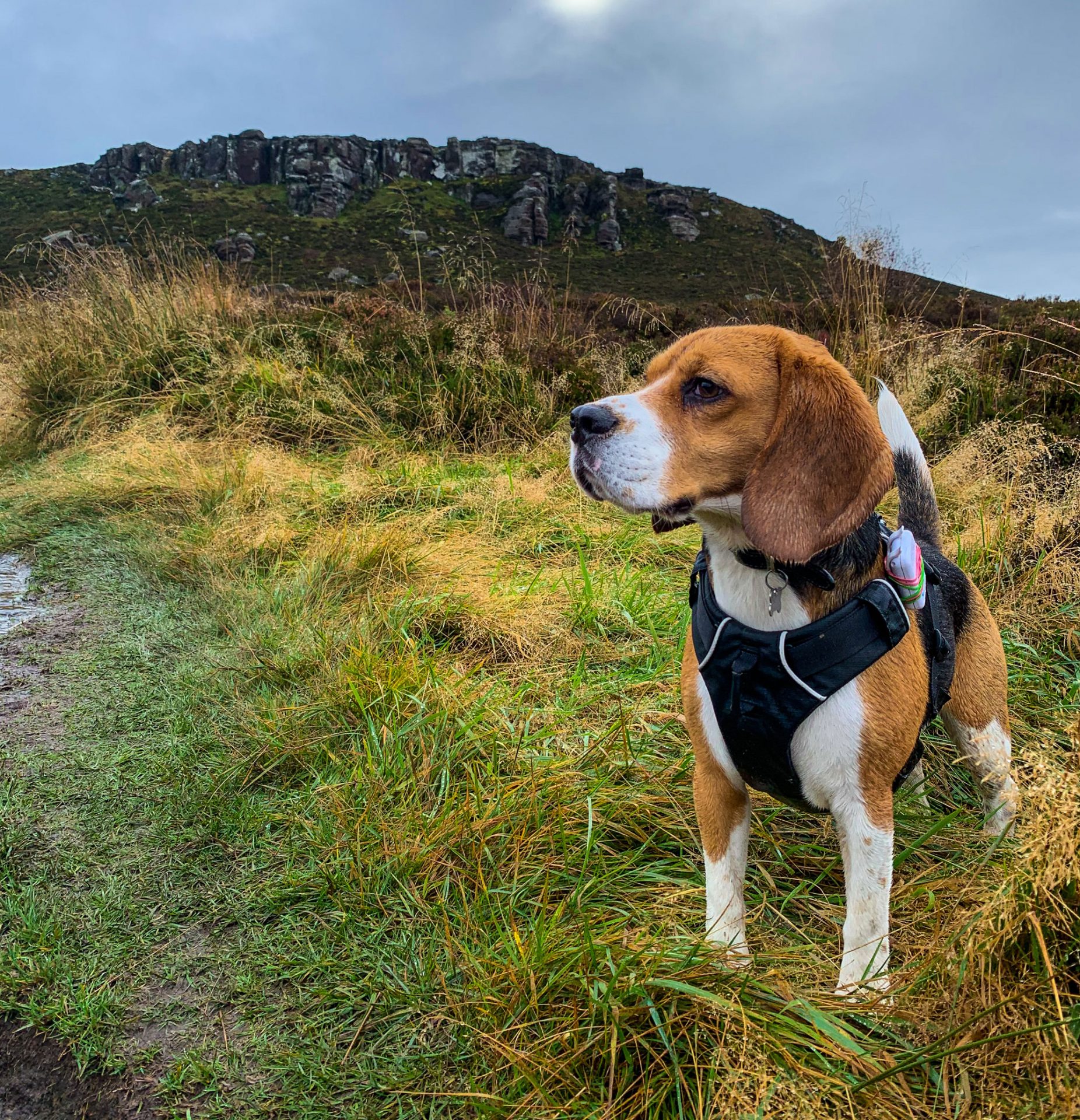 Once you’ve climbed up the crags, you’ll be rewarded with some pawsome views of the Coquets and Cheviots. This is a good spot to stop for a tasty snack. Make sure your human brings a selection of tasty nomz and some water. 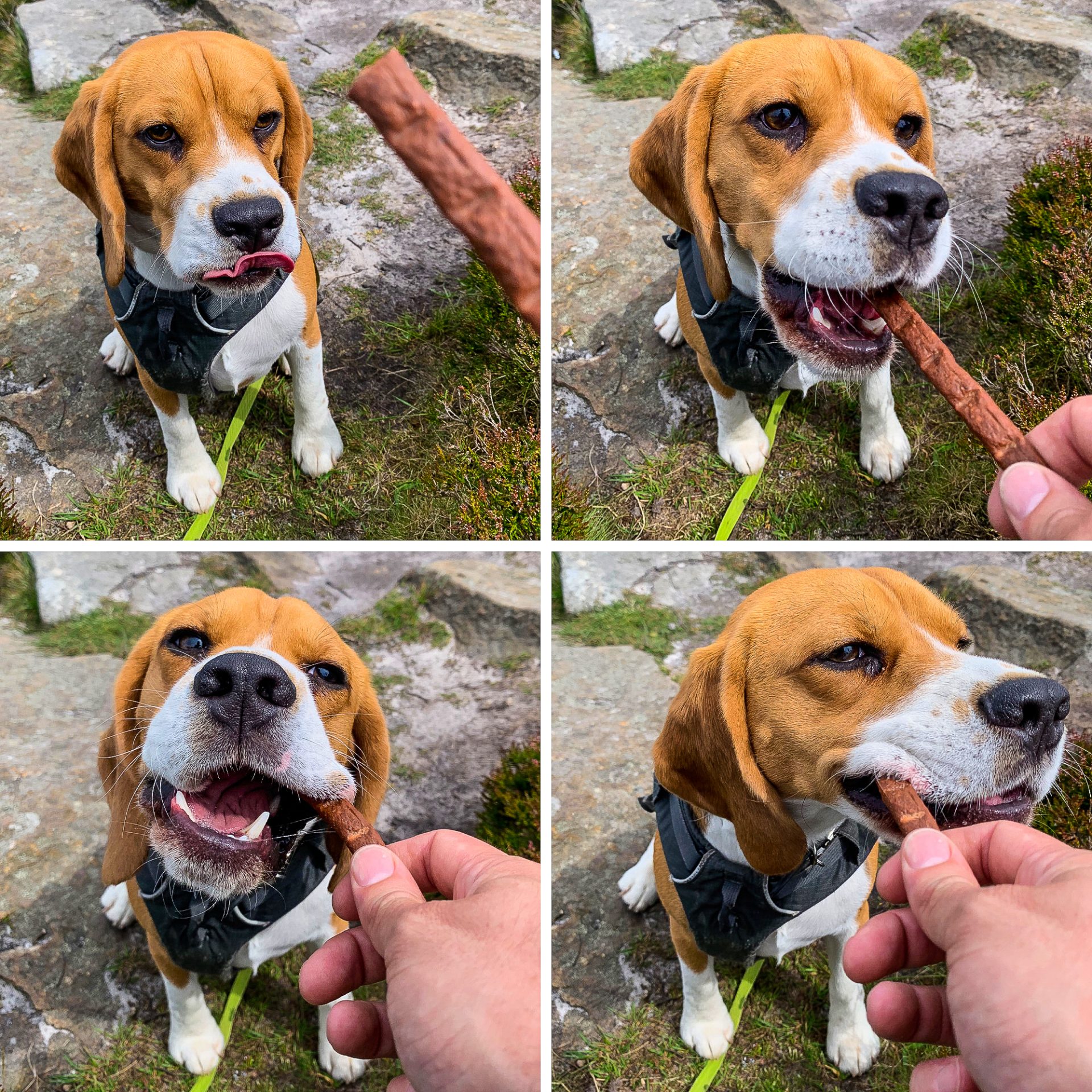 Once you’ve refuelled, you then set off across the top of the fell. You will see a pathway made from stone slabs that leads you from summit to summit, from Simonside Crags, up to the cairn, then along to Dove Crag and The Beacon, before you start your descent down to Lordenshaws car park.

Whilst you are sniffing your way along the moorland keep your peepers peeled for some pretty interesting stuff. The rocks along the hill top are peppered with ancient cup marks from proper ages ago… like thousands of years before the Romans came over, when British humans lived in round houses. 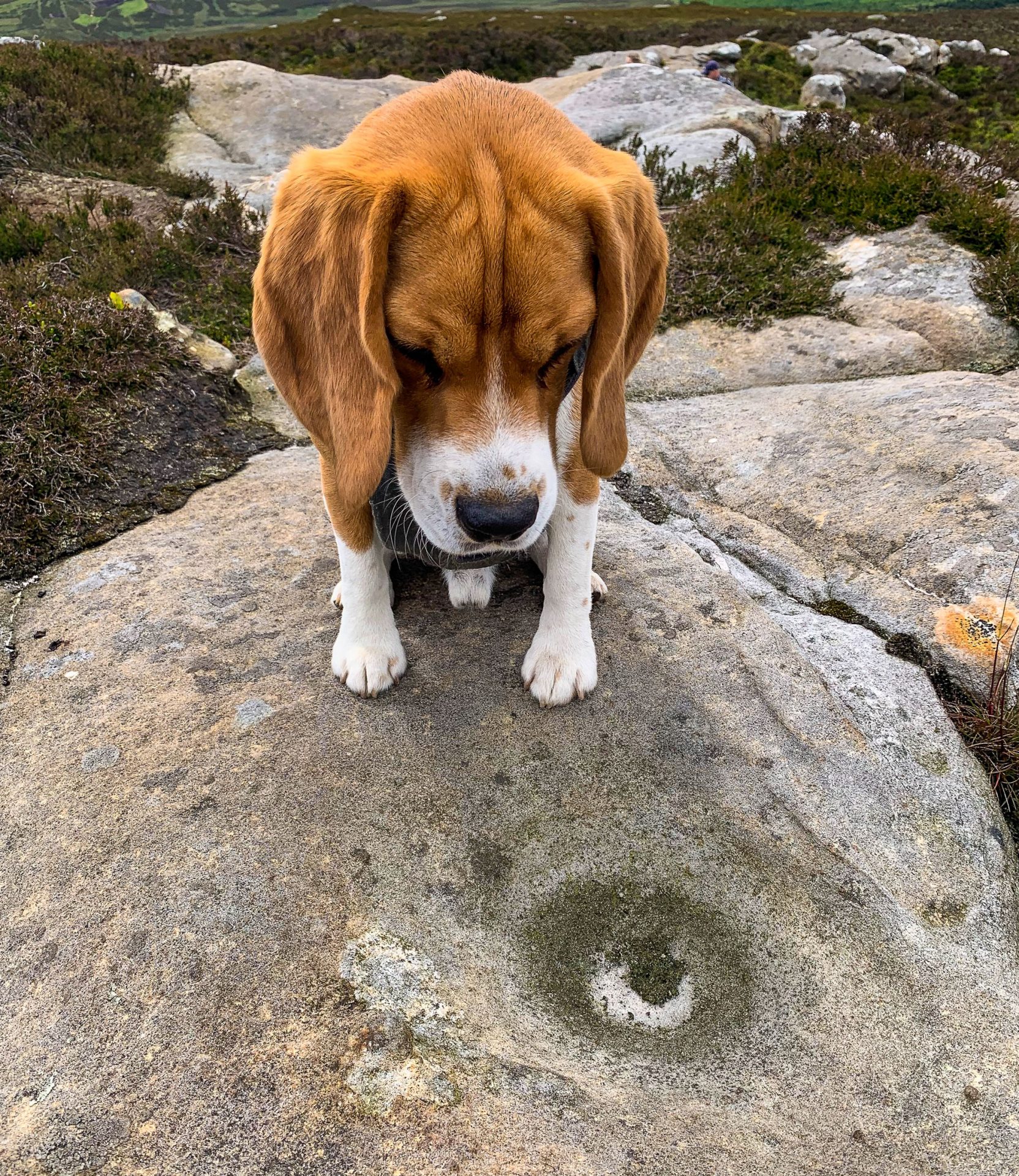 Another interesting landmark that you might want to check out is Thompson’s Rock, which is found on the lower slope of Beacon Hill. It is a huge holed rock that is surrounded by a small stone circle (ancient people loved circles). The hole is the centre rock is alleged to line up with the mid summer sunset, but no one knows for sure if it is natural or man made (the human thinks it was aliens).

You also want to watch out for adders if you are there in the warmer months. You don’t want to get bitten from one of those guys, that wouldn’t be pawsome at all.

Once you’ve come down from the hill top you will find yourself back at the road. Take a left and follow that back to the woods. You will cross a cattle grid and not too far after that you will find a path on the left that leads you back into woods. Follow this and it will bring you back to the car park.

I have been lucky enough to visit Simonside twice this year. Once in the summer when it was dry, and once on the autumn in the wet. Which is why in some of the above pictures I look soggy and others it is nice and dry…. Simonside is pawsome whatever the weather.