On the edge of the Cheviot Hills, close to the Scottish border is a large twin-peaked hill known as Yeavering Bell. At the very top are the remains of the largest Iron-Age hillfort in Northumberland. So, when we found out about this place we just had to go and check out the ancient sniffs amongst the rubble of the 2,500 year old walls.

Yeavering Bell can be found south east of the small village of Kirknewton, which lies approximately five miles from Wooler. It is here where the adventure begins! You need to tell your human to park their car at the activity centre opposite the church. Once they have put their boots on and packed your nomz, you start off with the church on your right-paw side. Follow the road around to your left and then follow it to the right (ignoring the metal gate), before you know it the road will turn into a dirt track that again takes a right almost as if you’re going back on yourself. 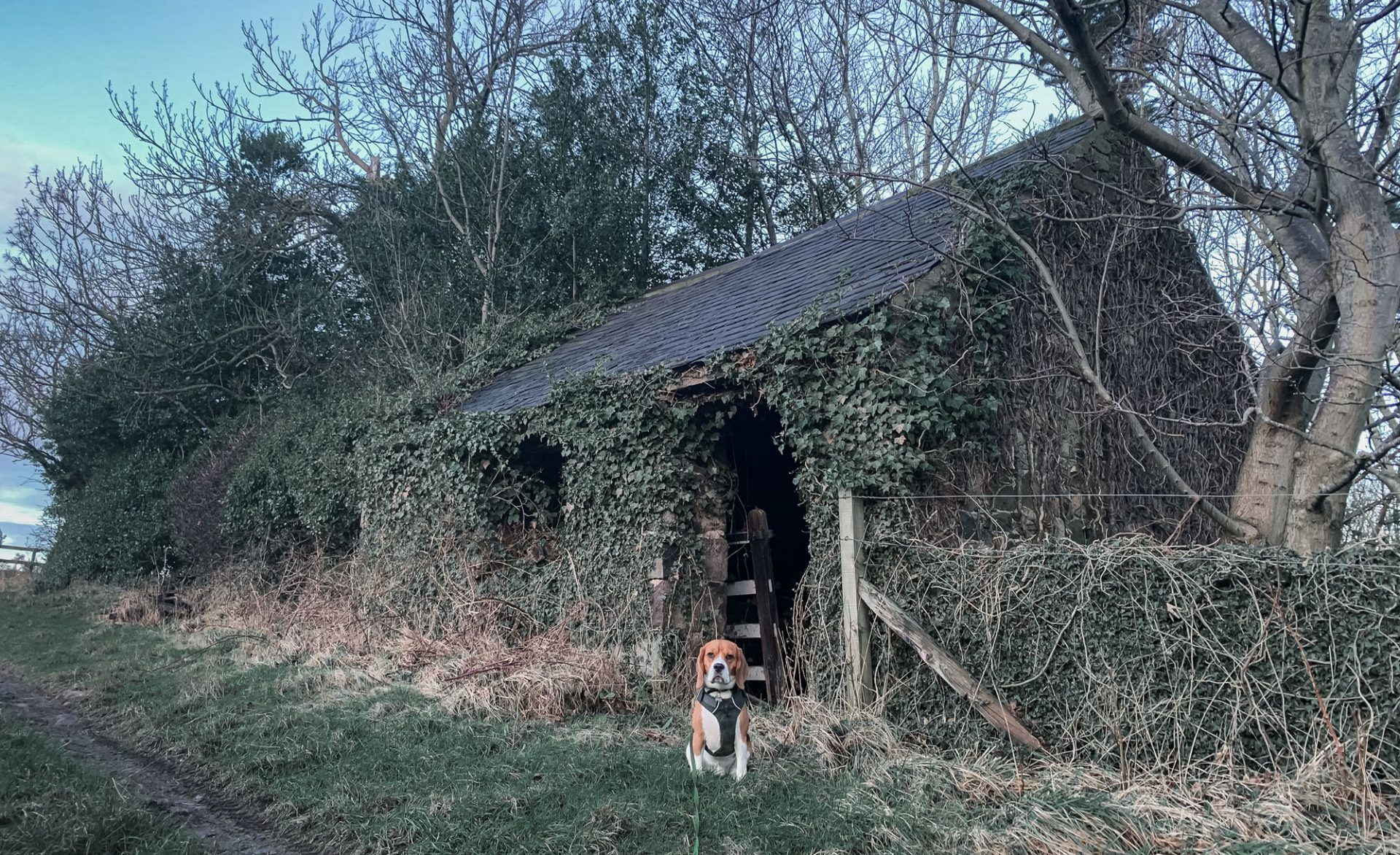 As the track starts to steadily climb, you will sniff your way past a couple of old buildings, one of which (pictured) was an old blacksmith’s forge. The human said that this is where they made shoes for horses, which sounds a little silly to me! I’ve never seen a horse wearing a pair of Nike’s… Anyhow… The second building is an old cottage that hasn’t had any humans live in it since the 1950s, which is yonks ago. Once you’ve passed the cottage you will start to see West Hill appearing on the left and College Burn winds its way to your right.

One thing you need to be aware of is sheep. The land around all around Yeavering Bell is farm land that is mainly used for livestock. It is advised that us doggos are kept on a lead unless you are super boring and don’t like chasing sheep. 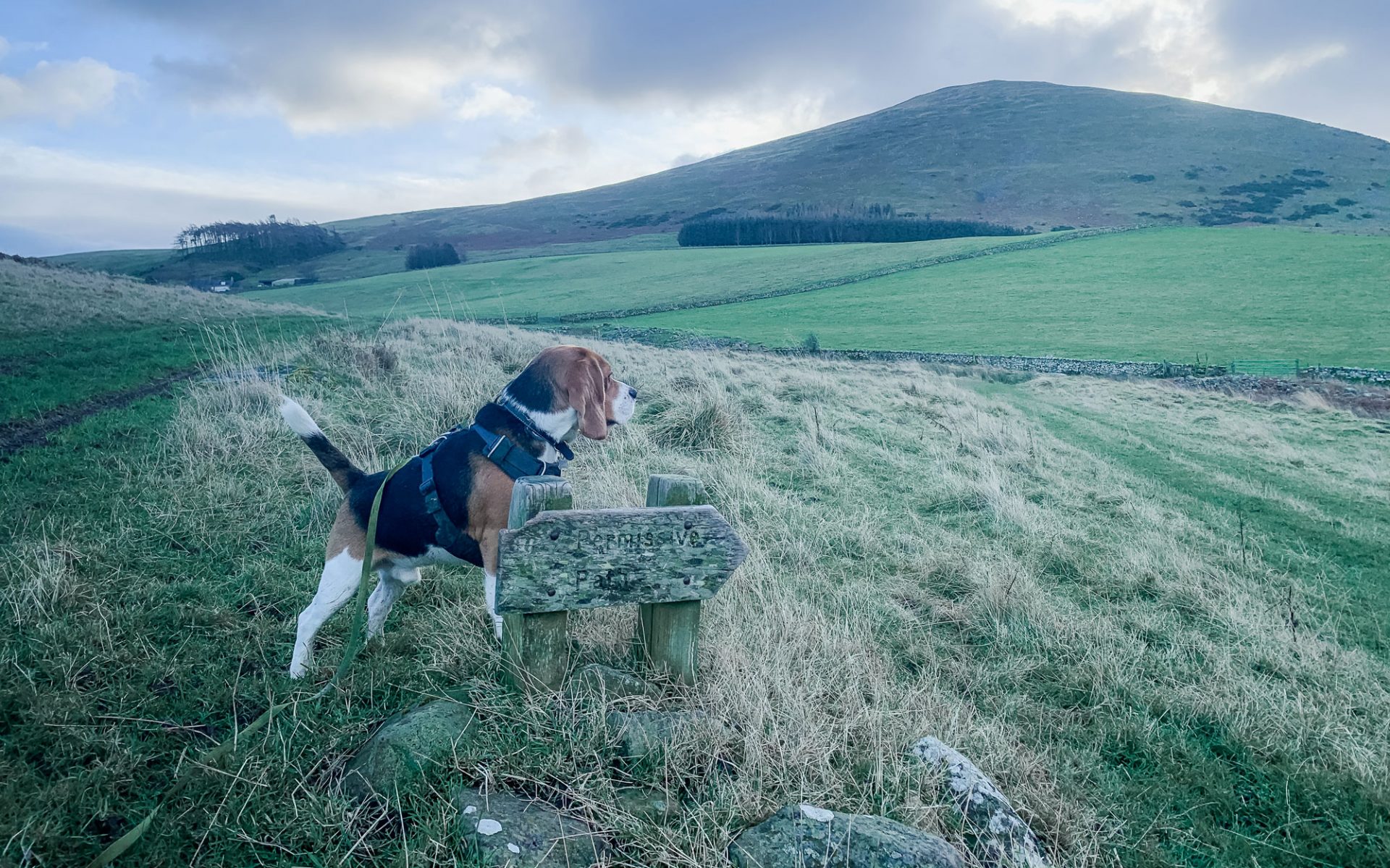 As you walk along the track and steadily curve round West Hill you will end up coming across a signpost that says “Permissive Path”. By the sniffs of it, this is a popular stopping spot for doggos. I took full advantage while the human checked his map. Follow the sign to the gate/ladder stile and enter the field. Then bear left and head for another gate/ladder stile. Once you are in the next field follow the faint track that crosses the field to your right as if you’re heading for that massive hill that is called Easter Tor. When you get to the other side you’ll find a small gate in the wall, once you’re through that you’ll join up with the track of St Cuthbert’s way, which… if you follow it to your right will take you to Melrose and if you follow it to your left it will take you to Lindisfarne… and left is the way you need to go. 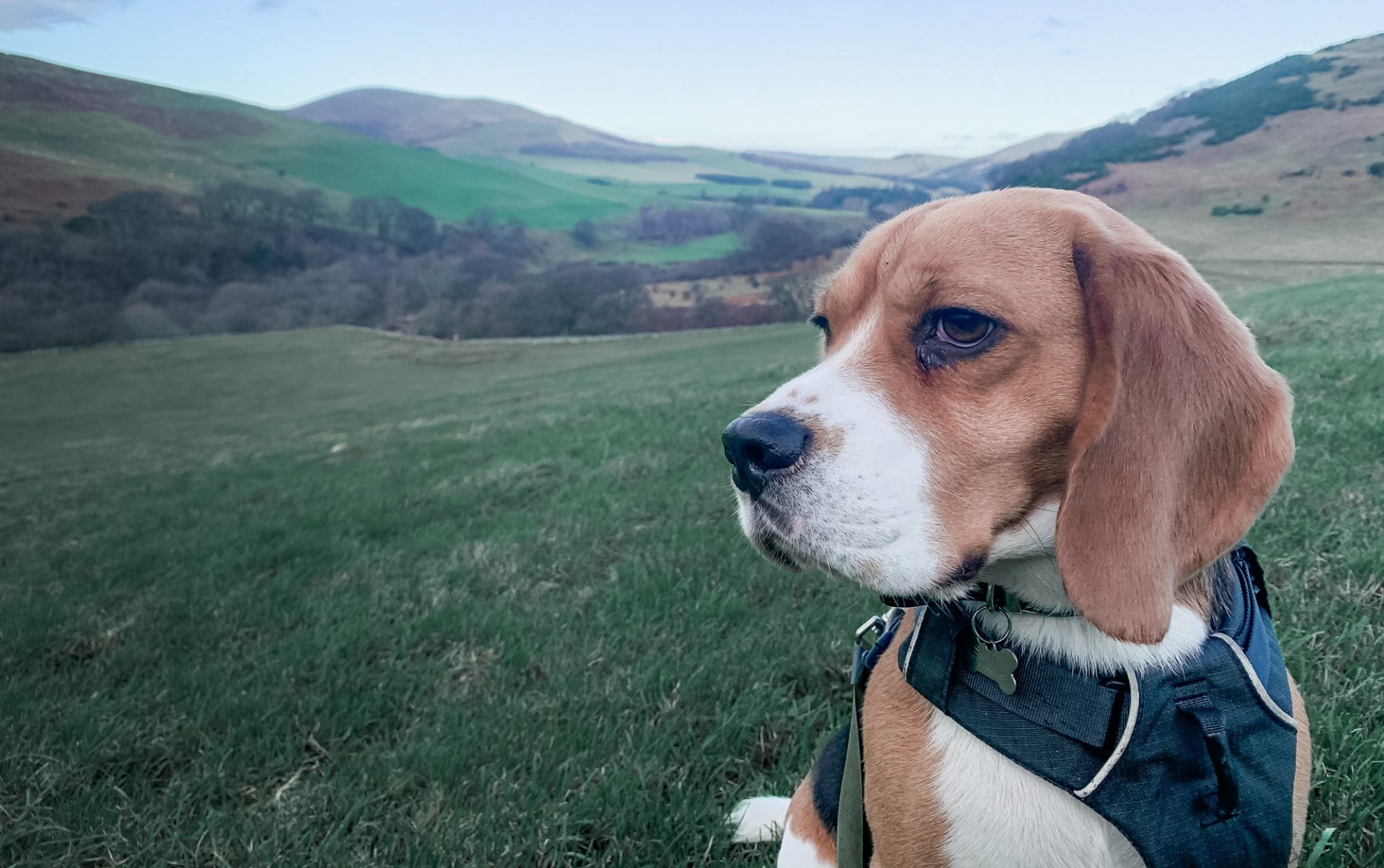 You head along the dirt road, past a farm (which has some very loud doggos living in it) until you reach a wall and a cattle grid. Take a left at the wall and follow the clearly marked path up the hill on your right. You pass some odd piles of rocks as you walk up… dog only knows why they are there? Ancient people liked to pile up large stones. Maybe it was them? Maybe it was aliens? Or maybe it was the farmer and his doggos?

Keep following the path until you get to another gate/ladder stile, climb over and continue along the path, Yeavering Bell will be on your left. As you walk up you will come to a point where the path forks and the left of the fork becomes a narrow muddy track that winds in-between the heather and long grass.

Follow this and it will take you down to a tiny little burn, that once you’ve jumped over you will begin your climb up Yeavering Bell.

As you make your way up the south west slope you will come to what looks like an old sheep stell. It was a little breezy on the day, so me and the human decided to take shelter here and have a little rest, drink and something to eat… I had some tasty chicken flavour doggo beer and some of my Pawsome Venison Bites to keep me going. 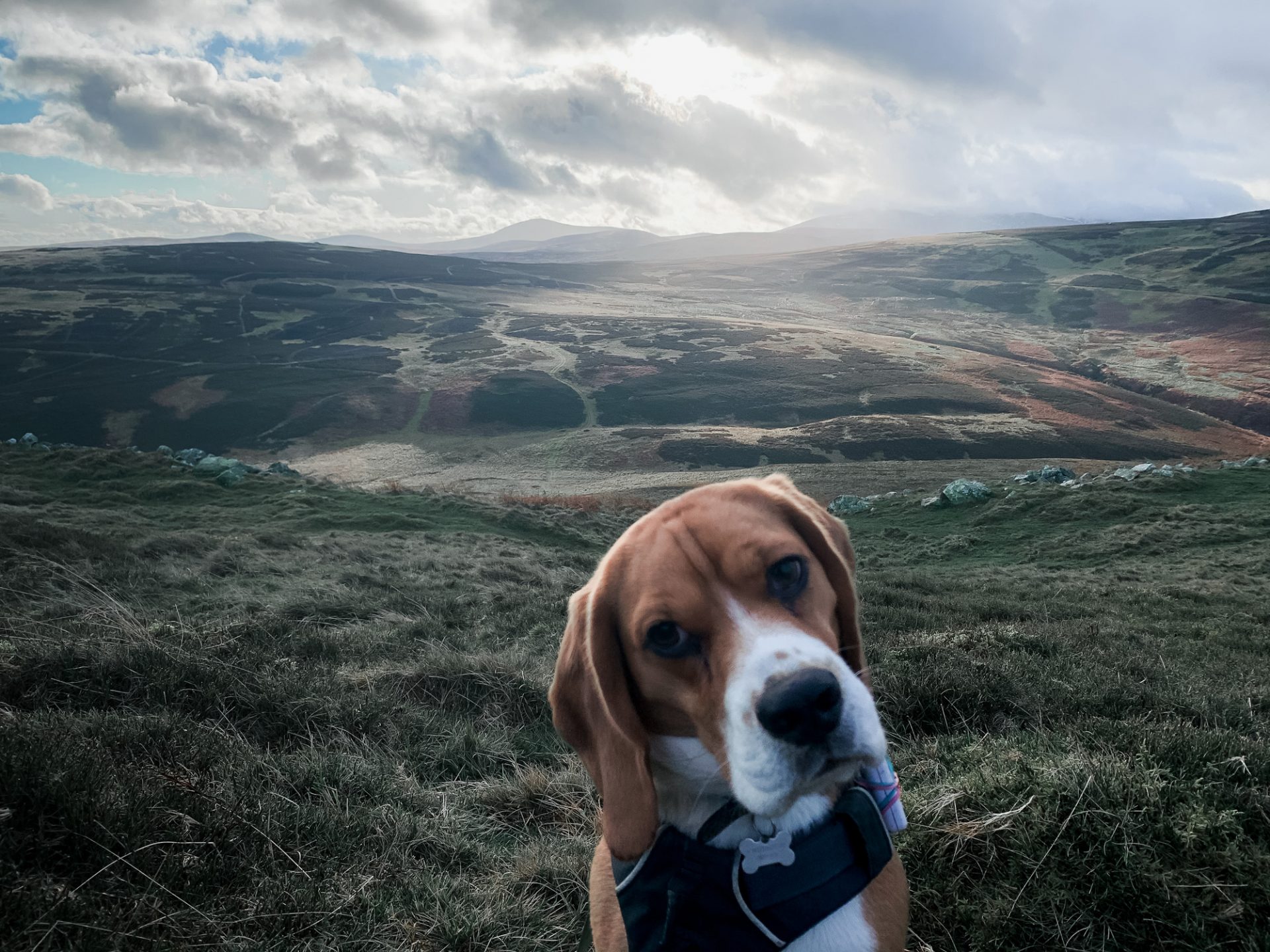 Once we got moving again we headed up the hill to the summit and walked in through the southern entrance of what remains of the fort. In the distance you can see Hedgehope Hill which happens to lineup with this ancient doorway. Every day, just before noon, the humans that lived in the fort could look through the entrance with their doggos and see the sun at just about its highest point of the day directly over Hedgehope… coincidence? Pretty clever for old folks! Unfortunately we arrived a little after noon, but it was still pawsome to be walking into a 2,500 year old settlement with the sun coming through the clouds behind us.

Little remains of the stone walls, which would have been over two metres high and more than three metres thick, but you can still sniff a scent of ancient awe amongst the tumbled stones. 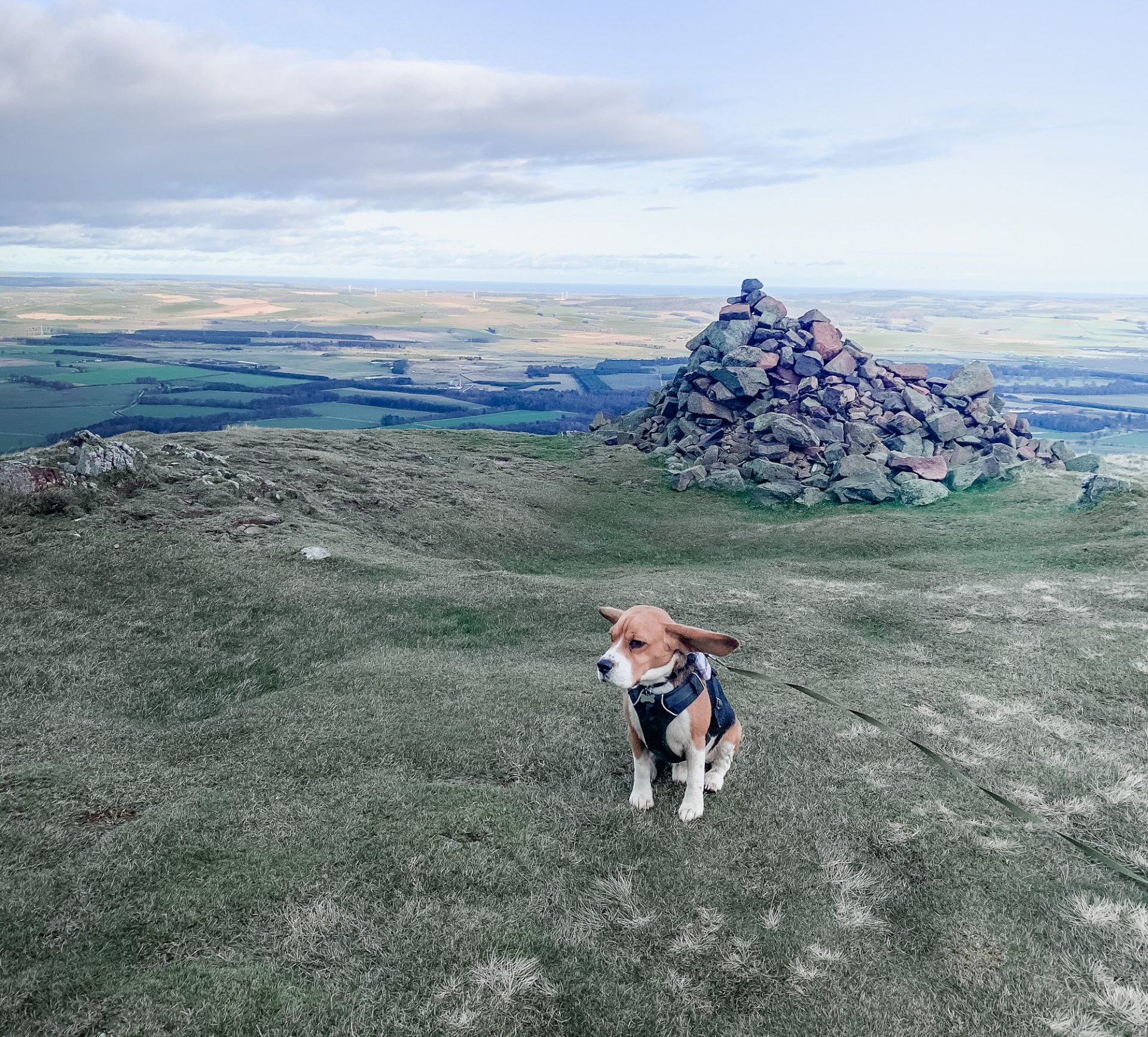 As we explored the twelve acres of Yeavering Bell with the wind in our ears, we could see the footprints of the ancient human round houses. To me it seems pretty crazy… I mean why would you live in a house without corners? Where did their doggos cock their legs if they had no corners?

The views from the top are totally pawsome! There is something to see in every direction! From the North Sea to the East, Scotland to the North, Hedgehope and Cheviot to the South as well as the College Valley to the West and once you’ve finished taking it all in, it’s time to head back down. The path that takes you down is found on the North side, almost exactly opposite where you entered the fort in-between the two peaks. It’s not an easy walk down for the humans, so you might need to take it easy to help them pick their way down the steep trail that traverses it’s way down to Old Yeavering. It is quite clear which way you’re heading and after crossing a couple of fields you’ll arrive at the road that you were once at earlier in the day. As you go through the gate and join the road, turn left and follow the road back towards West Hill and the farm house with the noisy doggos. 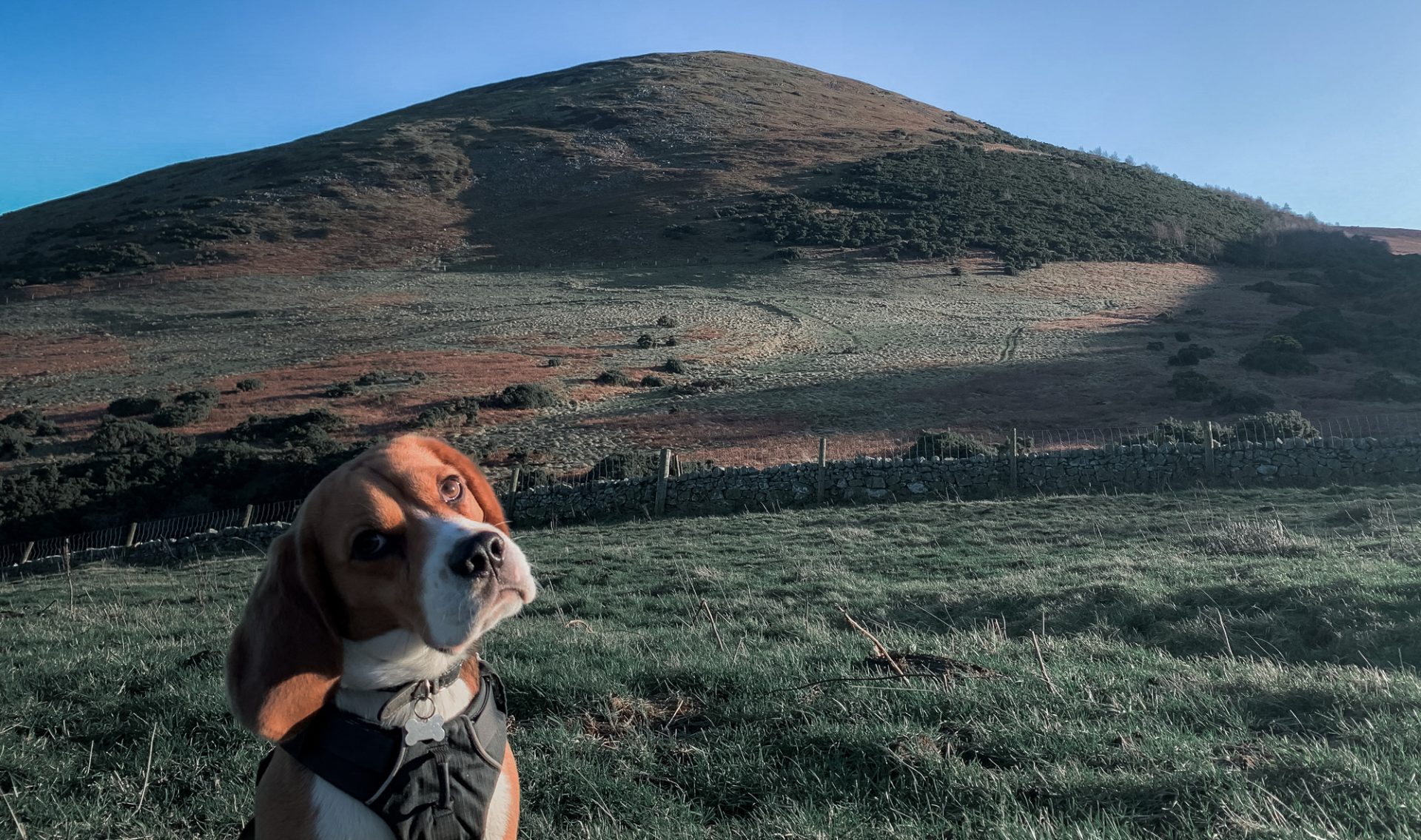 As you follow the track you will have Yeavering Bell on your left and St. Gregory`s Hill on your right. St. Gregory’s Hill is also home to an Iron Age Hillfort, like most of the hills in the area. It makes you think that this place must have been a pretty busy place all those years ago. What were they doing? Chilling? Playing Fetch? 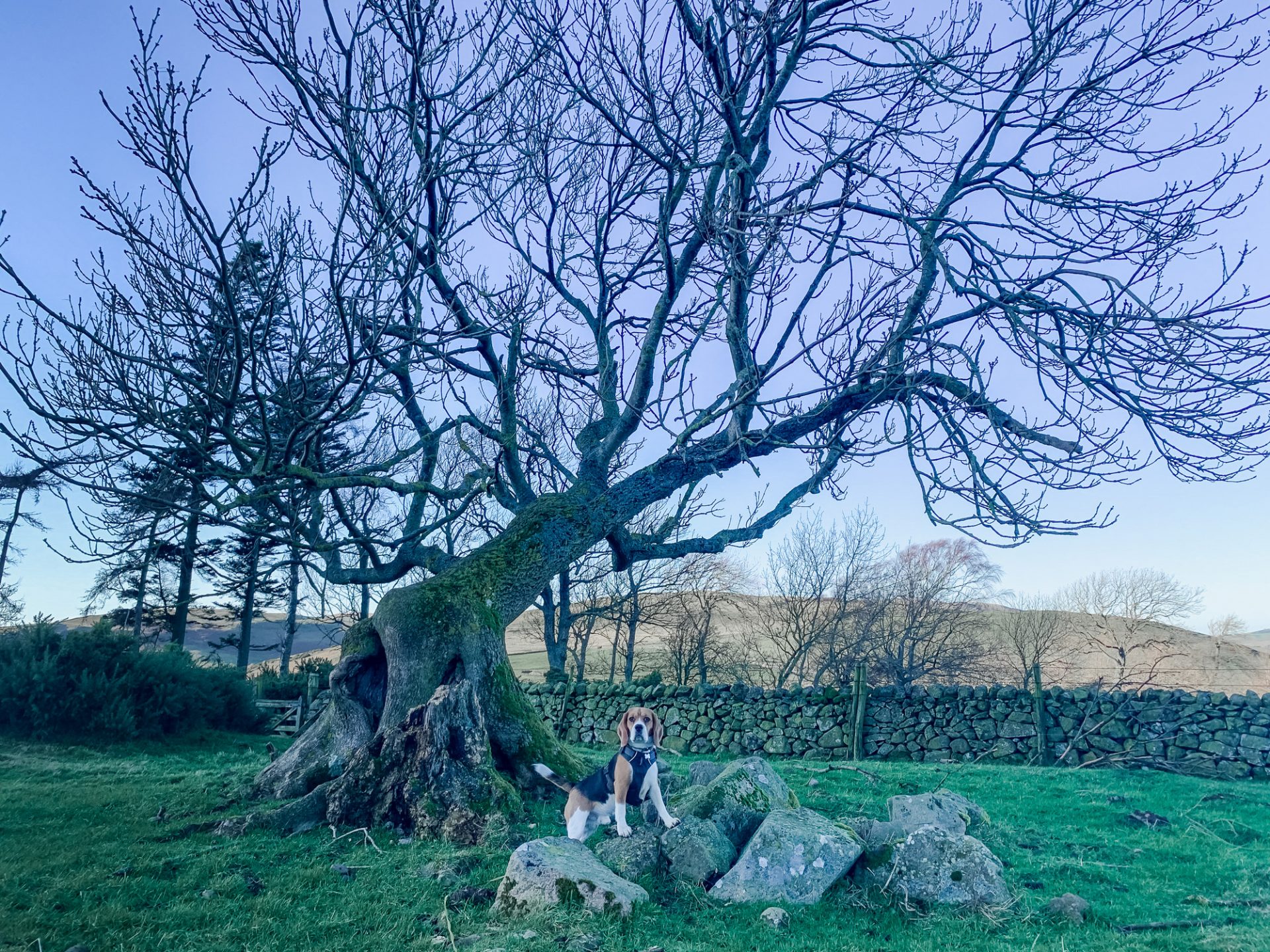 You also pass a very odd looking tree growing at a forty-five degree angle, just keep on following your nose. You’ll probably start to hear the noisy doggos as you approach the farm house and on the left you will see the path you took that lead you up to Yeavering Bell on your left. From here you’re going back on yourself. Take the path back across the field towards West Hill, only this time when you approach the gate/ladder stile look to your right and you will see another gate, head through this and begin your climb up west hill. You’ll notice that there are a myriad of little pathways criss-crossing the hillside, we took the one that bears up to the right towards a pile of boulders that look like they could have been part of some kind of stone circle… These are well worth stopping at for a sniff.

Once you’ve checked out the stones, then it’s time for the final climb up to the top. As you reach the summit you will notice another hillfort (TWO HILLFORTS IN ONE DAY!!). This one is less exposed due to  grass covering the buried circular ramparts. You’ll also notice the traces of a square building, this is quite possibly Roman, as they liked their buildings with corners. 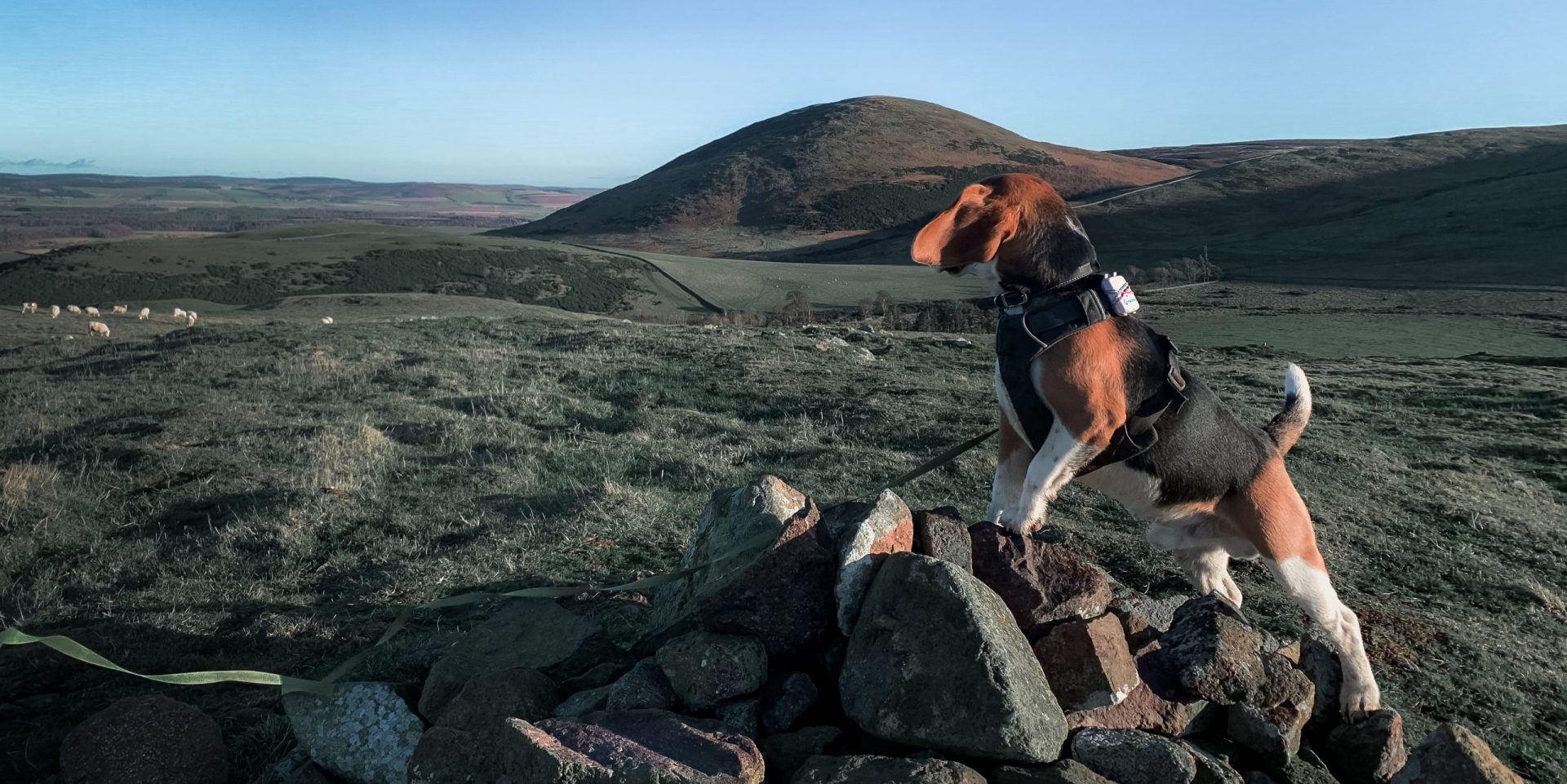 This is your final chance to stop and take in the views. The human tried to take a selfie of the two of us, but I was having none of it. I just wanted to get back to the car and have some dinner… The only way was down!

You can pretty much head back down to Kirknewton any-which-way you like from the top. The easiest is to head east, in the direction of Yeavering Bell, down towards the fence line and a little stile that will get you over. Just keep following the fence down, over the fence at the bottom, across the field and you’ll find yourself back on the road just near the old forge. Then you just follow the scent that you left earlier, back to where you started.

All-in-all we walked about eight miles altogether and it took us about four hours or so, including stops for nomz and sniffs.